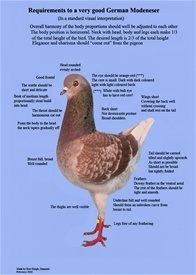 The fact, that the Modeneser belongs to the hen pigeons, is an important consideration, when judging this breed.

The overall impression and type have first priority. Then legs (length and transition to body), head, eye, eye cere, colour and markings are rated. This is not to be interpreted, that type only will do it, if the bird has poor colour and /or markings.

The first impression the judge gets, is an important element. Condition and vitality are significant components in this assessment.

It is then the shape and type, that is most important. The desired length is 2/3 of the total height. The height is divided in three equal parts i.e. legs, body and neck and head. It is very difficult to designate a precise measurement, as the relationship between the body parts is the key to a good bird.

In show position, the Modenesers back should be horizontal. A good result here can only be expected, if the bird has sufficient training in the show pen.

Seen from all angels, the body should be well rounded and have an unbroken underline.

Double decked underline or loose feathering in the ventral area prevents a bird from achieving high points. The frontal view shows a broad and round breast without protruding wing butts.

The neck tapers gradually off towards the head, and shows a well defined throat, which arches nicely into the neck. Too much or no gullet at all are faults. Birds with a tendency to blow or have thick necks are unattractive, and cannot compete successfully. Bull neck is not desired, and will ruin the desired elegant sweep.

The tail is tilted slightly upwards, but not to the same degree as the Maltese or the Florentine. The characteristic shape would in such a case be disturbed.

The legs and the thighs are well visible below the underline. Seen from the front the legs are perpendicular. When in show position, the Modeneser is often standing motionless on its toes – a sign of good breeding.

The legs and toes are always unfeathered and bright red. Blacks and other dark variants have sometimes a tendency to have a darker leg colour. This will normally disappear, when the young bird is through the first moult. If not, the bird is not fit for the shows.

The colour of the nails has no significance.

The German Modeneser has changed the shape of the head during the last 10 years. Earlier on, longheaded and flat headed birds without frontal were shown. Today the requirement is a nice, round head with good frontal, which also shows width. The beak is getting shorter and with more substance than before. Snipey and flat heads have no longer a winning chance at the major shows, and the same goes for long and thin beaks. Feminine heads in males will also prevent high points, and it is expected, that males have masculine looking heads. The beak wattle is short and delicate, while coarse and big wattles are not at all desired.

This modern head is admired not only by the breeder of the German Modeneser.

The eye shall be a bright orange-red, shiny and with a well defined pupil. Some colours will differ in eye shades, and browns and dilutes will only occasionally come close to blacks and blues in eye colour intensity. Dark, unclear, brownish or greenish eyes are not a pleasure to see or judge. The DDR recognized bull eyed whites, which has been carried on, and the only condition is, that the two varieties are shown in separate classes.

The eye ceres are very important and special precautions are necessary when judging.

The cere is very thin and delicate, and the bird must be at ease in the pen, when the cere is evaluated. If the bird becomes exited, the cere will open up, and a proper evaluation is no longer possible. The colour of the cere, which is evaluated with the bird in the pen, varies with the colour of the feather. The dark variants should have an almost black cere, while the light colours should have light eye ceres. Red or coarse eye ceres are major faults. In some colours is a degree of tolerance necessary.

Despite the fact, that the GM is bred in many variations, the requirements are clear and rich colours and correct markings.

The gazzi has the head, the upper part of the throat, the wings, flights and tail coloured, all other parts are white. On the head, the colour forms an elegant circle, when the beak is pressed down on to the throat. At the back of the skull the ideal line of demarcation is found by drawing a line through the beak and eye. From the back of the skull the line runs in an arch which passes approximately 3 centimetres below the beak. The bib will at this point always show variations, but it is preferable with a somewhat larger bib than to have excessive trimming.

Trimming according to the general rules is acceptable, but under no circumstances should cut feathers be visible.

The wing shield colour must have a clear demarcation and include coloured primaries. The back is white with a coloured “bridge” between the wings. It is important with thoroughly colour in and under the tail. A few white feathers in the ventral area can be trimmed, but if this fault is excessive, it is to be penalized. A few coloured feathers on the inside of the thighs are acceptable, as this is an indication of colour reserves, which is a requirement for richness in colour.

When breeding schietti some of these problems are eliminated, since the body is coloured, and the permitted patterns are on the wing shield (except mottles, teagers and grizzles). This includes argents, bronzes and ochre sulphur, where the colour is of an even shade over the entire wing shield with or without lacing (argents are always laced). Argents have a tendency to lack or insufficient lacing in the shoulder area.

The barred varieties are required to have long, narrow bars with pure colours, and the bars should be as parallel as possible

In checkers the pattern is supposed to be pure and even throughout the shield area.

Teagers, mottles and grizzles differ from ordinary schietties, in that these varieties have patterned body colour. Until these varieties were recognized, all schietties had self body colours. Blue and black teagers have white feathers evenly spread except in the tail and the primaries, which must be solid in the ground colour.

The mottled varieties may carry white feathers in the tail and the primaries. Grizzled show the grizzled factor all over, except in tail and primaries.

The magnani comes in two varieties, a multicoloured and a stipper. The requirement is that in both varieties, the entire body should carry a lot of “flecking”.

Compared to the English Modena the German Modeneser has a much tighter feathering.

Particularly the neck feathers are very tight and smooth. When assessing the feather quality, the bird should be at ease in the judging pen in order not to get the feathers ruffled by excitement. If the bird has a coarse neck feather or shows tendency to roughness or rosettes in this area, this should be penalized in the judgment. These traits are prone to be inherited. Hair feathers and loose feathering are not desirable in a German Modeneser. An exception is in the ventral area, where a downy feather will enhance an even and smooth underline without appearing coarse or protruding.

The tail should be as short as possible and tightly folded. Broad or open tails are not desired at our shows.

The wings, short, folded and shall rest on the tail. The wing tips should not cross, and shall not reach the end of the tail, and never be longer than the tail in length.

Carrying the wings below the tail or crossing the primaries are classified as faults.

Image is from the German Special Club's exhibition of Langenberg in 1987 and shows a young cock rated HV, to day 96 points (the second highest rating). By contemporary evaluation the cock in blue gazzi has several wishes and faults: 1. Lack of chest depth (fault) 2. Shorter rear end (wish) 3. Loose feathers behind the legs (fault) 4. Downward beak position (fault) 5. Pointed forehead (fault) 6. Better head switch (wish) 7. For a cock - cleaner blue color in shield (wish). The picture illustrates the trend in what the German Modeneser has been developed over the last 20 years. 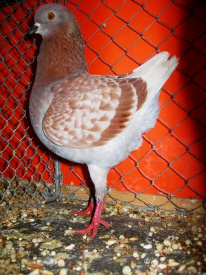 An up to date model - higest rated at the German Special Clubs exhibition of Nürnberg 2008 - a red checked hen from Hans Jürgen Zimmermann, Germany